EVEN housing projects facing additional buyer’s stamp duty (ABSD) deadlines next year have yet to sell all their units – but their developers are confident these will be sold in good time, following an opportune mix of strong demand and low supply at launch that allowed them to rack up brisk sales.

According to data from real estate consultancy Cushman & Wakefield, the projects have a total of 95 unsold units. However, of the seven, the majority have already cleared over 90 per cent of their inventory as at end September this year.

Some developers told The Business Times that they have sold additional units since end Sept, such as Hao Yuan’s executive condominium Northwave which cleared its final unit, while the 19-unit Cayman Residences has sold another four units, according to its developer Pinnacle Assets. This would leave the freehold landed property development at East Coast Avenue with two unsold units.

Developers are required to develop any residential site they buy, and sell all units in the new project within five years to qualify for upfront remission of ABSD on the land purchase price; if a developer fails to do so, it will have to stump up the 25 per cent ABSD, with interest. The remissible ABSD for residential developers used to be 15 per cent but was raised to 25 per cent for land purchased from 6 July 2018.

Analysts say developers working with ABSD deadlines in 2020 saw a swift take-up – thanks to both robust demand and low levels of supply as the market was starting to pick up again in 2017.

Wong Xian Yang, senior manager (research) for Singapore & Southeast Asia at Cushman & Wakefield, said: “The majority of projects with ABSD deadlines in 2020 and 2021 were launched in 2016 to 2018, which benefited from the recovery of property prices and demand in 2017. On the supply side, these projects were acquired in 2015 and 2016, a time when market sentiment was relatively weak and before the ramp up of en bloc sales. When demand poured in during 2017, the supply of new launches was relatively low. As such, these ‘first movers’ enjoyed brisk sales.”

Along a similar vein, JLL senior director of research and consultancy Ong Teck Hui pointed out that the Urban Redevelopment Authority had been curtailing residential land supply in the few years prior to 2015, in line with the softer private residential market.

The private residential Government Land Sales (GLS) supply on the confirmed list was based on 5,150 units, or 68 per cent below the high notched in 2011, JLL highlighted.

This number eased further to 3,730 units the following year in 2016, while only a few collective sales sites sold that year.

Some of the projects from 2015 GLS and private collective/en bloc sales have already sold out, while the majority of the others are at the tail-end of marketing, pointed out Mr Ong.

He said: “Most projects from the 2016 land sales are in an advanced stage of marketing with comfortable sales take-up. So generally, projects from land sales in 2015 and 2016 are under less pressure from ABSD deadlines.” 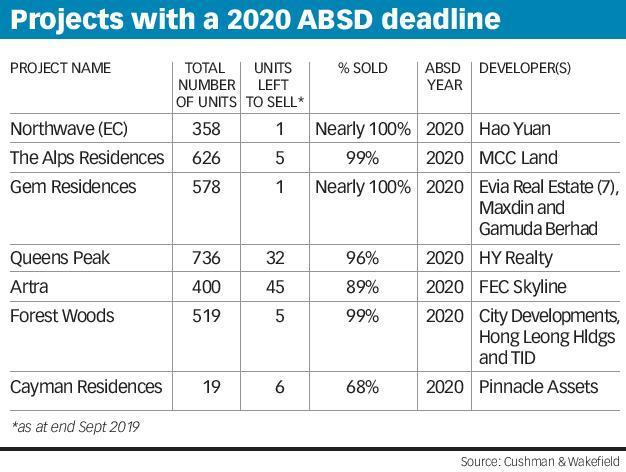 Developers that BT spoke to are confident of beating their respective ABSD deadlines in 2020, including Far East Consortium-backed FEC Skyline, which pointed to the Artra project’s access to Redhill MRT station and full range of facilities as likely draws.

HY Realty also expects to clear its remaining units at Queens Peak at Dundee Road before its June 2020 deadline. A spokesperson for HY Realty said enquiries have been healthy, mostly due to the project’s near finished facade, which is piquing interest. He added: “One of our ongoing (marketing) efforts includes plans to sell the four remaining penthouses with a fully-furnished interior design package, which will enable buyers a faster move-in process with less hassle.”

Farther down the line, residential projects which come up against a 2022 ABSD deadline may face more uncertainty given the economic slowdown. Mr Ong said: “A shorter economic downturn with earlier recovery would reduce the risks for these projects but if the downturn deteriorates and is prolonged, negative sentiments could weigh on demand and affect sales adversely.”

CBRE head of research for South-east Asia Desmond Sim expects that developers who launched projects for sale after the latest round of cooling measures in July 2018 – which also brought higher ABSD rates for some groups of home buyers – may face more of an uphill task than those who commenced sales before that.

While buying momentum remains, supply is outpacing demand, and buyers too are prioritising affordability. As such, developments featuring units with larger quantums of S$2 million and above may face more pressure to clear stock.

Mr Sim added: “For 2021 and beyond, there will be an increasing number of developments with a larger proportion of unsold units. Developers need to be flexible and creative in how they’re going to let go of the final units.”

Strategies could vary though, depending on how deep-pocketed developers are or whether they have other upcoming projects in the vicinity. Those who acquired their sites before last July’s ABSD hike are also subject to a lower ABSD rate of 15 per cent. “Some developers may choose to pay the ABSD and then perhaps lease out the remaining units so they can sell them later at better margins,” Mr Sim suggested.

Mr Wong expects that most of the developers with ABSD deadlines in 2022 will be able to sell off their units, as long as demand holds firm at around 9,000 to 10,000 units sold annually. But he added: “Demand is diluted across multiple launches and competition for buyers remain keen… developers have to be strategic about pricing and offer buyers incentives and/or higher agent commissions.” Other marketing schemes include deferred payment or star buy promotions.

Still, several developers with ABSD deadlines in 2021 and 2022 remain upbeat. The 841-unit Seaside Residences, which is being developed by a consortium led by Frasers Property, has sold 91 per cent, or 768 units, to date. Its ABSD deadline is January 2021.

A Frasers spokesperson said: “As the development gears up towards completion in the second half of 2020, we continue to see momentum in our sales with home buyers looking for a seaside home. We believe that our thoughtfully designed and well-built homes will continue to attract discerning homeowners.” Frasers also cited its proximity to East Coast Parkway, schools and upcoming Siglap MRT station.

Yen Chong, deputy general manager of developer Qingjian Realty (South Pacific) group, said: “I think there is no shortage of buyers who want the laid-back lifestyle they can enjoy in the Thomson area… I am sure we will continue to see the steady demand we have since JadeScape’s launch.”

Separately, in a nod to Singles Day – a popular shopping event in China that takes place on Nov 11 each year – the developer has started offering “selected units at special prices” for a limited period, Qingjian Realty said on Thursday.